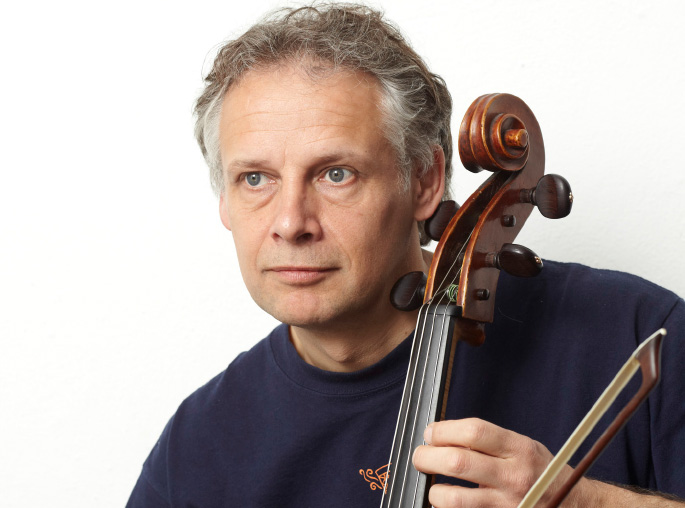 Master Class for Cello with

Registration deadline July 15st, 2018
The registration shall be binding.

The course is aimed at students, professional cellists, and listeners. Lessons will be organized according to the individual levels of the participants and Pieter Wispelwey’s impression of the cellist. Therefore, every active participant should enclose a video-link of his/her play and the repertory when registering. Pieter Wispelwey is open to most of the standard repertory of Baroque (J.S. Bach), Classical, Romantic, and contemporary “classics“. The participants will be accompanied at the piano by Mrs Fiore Favaro. As Artist-in-Residence, Pieter Wispelwey will be present at Chesa da Cultura for the entire master class. The master class will open on August 19th, 2018, at 6 p.m. with a convivial dinner. The closing concert with the participants will take place on August 25th, 2018, at 8.30 p.m.

Pieter Wispelwey is equally at ease on the modern or period cello. His acute stylistic awareness, combined with a truly original interpretation and a phenomenal technical mastery, has won the hearts of critics and the public alike in a truly wide-ranging repertoire. Among his approx. 50 CDs are the concertos of Walton (Sydney Symphony), Dvořák (Budapest Festival Orchestra), Shostakovich and Schumann (Australian Chamber Orchestra), Tchaikovsky (Deutsche Kammerphilharmonie Bremen), Prokofiev, Britten, Elgar, Lutoslawski, Haydn, Lalo, and Saint-Saëns as well as three recordings of Bach’s Cello Suites and two of Beethoven’s Cello Sonatas. He is currently recording the complete duos by Schubert and Brahms with Paolo Giacometti, with four of six instalments released to date.

Fiore Favaro has studied in Italy with Alessandro Commellato and Riccardo Zadra. Between 2009 and 2013, she has been awarded two MAs at the Basel Academy of Music with pianist Filippo Gamba. She was given several 1st prizes at international music competitions and gives concerts throughout Europe as a soloist and chamber musician. In 2013, she played at the Teatro La Fenice in Venice. Fiore Favaro teaches Piano at the Basel Academy of Music.